The School of Postgraduate Studies (SPGS) was established in October, 2017.

The School admitted its first set of Postgraduate students in February 2018 kicking off with five Faculties and thirty Departments.

SPGS is currently hosted at the mini campus which is located in Oye town. It has approval from the National Universities Commission to commence full academic activities across five (5) Faculties as listed below:

Professor Raphael Ajayi Omolehin is currently the Dean of the School of Postgraduate Studies while Mrs Oyeyimika Koyejo-Fasakin, FCIA is the Deputy Registrar and Secretary to the School.

Professor Raphael Ajayi Omolehin is an expert in Agricultural Economics and Extension. He has twenty-nine (29) years of unbroken experience in undergraduate and postgraduate teaching, research and field work, as well as national and international exposures.

With a PhD in Agricultural Economics from Justus Liebig University, Germany in year 2005, an MSc (Agric. Econs) from Ahmadu Bello University, Zaria in 1997 and a B.Agric. in 1989, Professor Omolehin has supervised the theses of twenty-two (22) PhD students and thirty-nine MSc students.

He has over the years, attracted lots of research grants and awards as well as scholarships from both national and international bodies like: German Academic Exchange Scholarship to pursue PhD in Justus Liebig University, Germany, an annual research grant of $5,000 of Bill Melinda Gate for the promotion of Drought Tolerant Maize for Africa (DTMA) from 2006-2010 for the conduct of farm promotion and adoption in drought proned areas of the north such as Kano, Zamfara, Kaduna and Katsina states, among others.

ADMINISTRATIVE ORGANOGRAM OF THE POSTGRADUATE SCHOOL

The organogram for the Postgraduate School is presented in the diagram below: 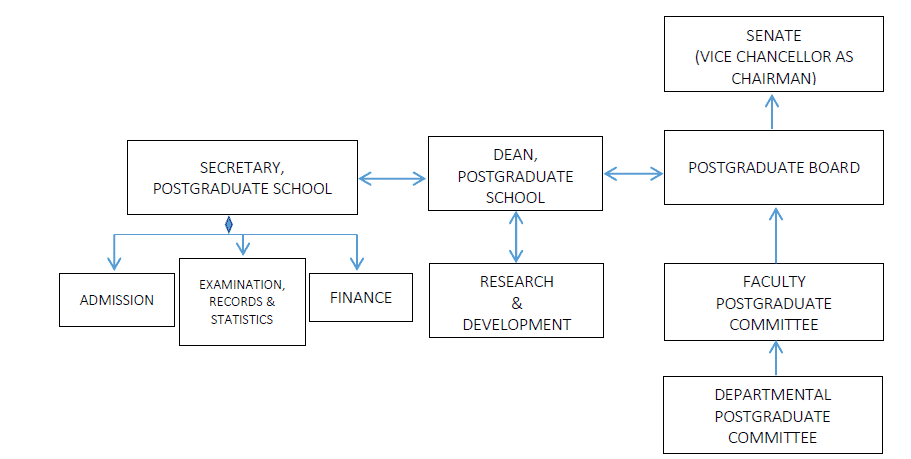 ADMINISTRATIVE FUNCTIONS OF UNITS IN THE POSTGRADUATE SCHOOL

He or she shall report directly to the Secretary, Postgraduate School on the day-to-day activities of the Unit.  He/She shall be assisted by a Programmer/Data Entry Clerk (DEC) in the running of the unit.

also handle issues relating to the organization of seminars, conferences and symposia, also it shall co-ordinate matters on research proposals of Ph.D students.

The Unit shall be headed by the Deputy Dean who shall not be less than a Reader/Associate Professor in status and shall report directly to the Dean of the Postgraduate School on the day-to-day activities of the Unit.  The Deputy Dean shall be assisted by an officer in the Administrative Cadre.